“So, you work in a prison? Is it anything like Orange Is The New Black? Or Prison Break? Or…”

I’ve received this question more times than I can count in the past few weeks. Whenever I tell people about my Independent Study, this is usually one of the first questions I am asked.

At first, I thought it was funny so I laughed it off. But now the more that the question is asked, the less funny I find it.

Is Orange Is The New Black really what people think prison is actually like? Or for that matter, do people think that any show or movie which depicts prison life is 100% accurate?

The women I work with know that they’ve done something wrong, but they want to get better and to start their lives again. The most “attitude” I’ve seen all semester is from the guards who work there.

Why is it that there is such a stigma against prison life? Is it because we as humans are afraid of the unknown, the unusual? There are so many questions, and sadly not enough answers yet.

But I can tell you one thing, this prison (and the people in it) are nothing like those in Orange Is The New Black. There’s not even a theme song!

Please let me know what you think, and share.

We’ve all lost something or someone. From old childhood toys to former friends, family members to even lost memories, we, as human beings are in a constant state of loss.

We can lament over the things we’ve lost. We can also hold out hope that we can rediscover for what we’ve lost.

This week the writing prompt for the inmates was to write a story about things we’ve lost.

But what happens if you’ve lost everything?

Many of the inmates in the correctional facility know what that’s like.

These people, whether by their own actions or the actions of others, have lost their homes, their freedom, their families.

They’ve lost their faith and their hope that things will get better. They themselves are lost, and they want to find themselves.

But what does it take to do that? Does it mean we need to lose everything to gain perspective on the world? Does dealing with loss = finding ourselves?

And who can experience loss? Is it only those who have something or someone to lose? Or can anyone experience the feelings of loss? I think that a loss isn’t only for the privileged, loss is for everyone. Everyone knows in some way what it’s like to lose something, to lose someone. Some people lose more than others, but that doesn’t mean that the ones who haven’t truly lost anything don’t know what it means.

I think that the things we’ve lost are a part of us and regardless of who or where we are, the feeling of loss is something we can all relate to. And if we have lost everything, the important thing to remember is that the feelings of loss are universal, you’re not alone in your loss. Yesterday was the second week of my independent study, Writing In The Prison.

And this week, something that I noticed while teaching was the emotions that were expressed, and how they were reacted to.

Several of the stories this week were deeply personal, and due to their personal nature, it also brought strong emotional reactions as well. Which is completely normal in any situation, but in this particular situation, I wasn’t completely sure how I should react.

This is where empathy versus sympathy comes into play.

Empathy: the ability to understand and share the feelings of another
Sympathy : feelings of pity and sorrow for someone else’s misfortune.
Can we as humans be both empathetic and sympathetic? Or can we only experience one over the other?
In the case of the inmates, it felt as if this class serves as a unique bonding experience for them, as it is allowing them to share their thoughts and feelings with each other. But while the teachers share as well, it feels like there is still a disconnect between us. Because while we are part of the class, we still are part of the “Them”.  Even though we do not hold the same authoritative positions as the guards, we’re still volunteers in the facility. We have the freedom to leave at any time, and we technically do not have to return. We choose to come each week, for different reasons. We do not fit into a proper category because of our freedomswe are not inmates, and we are not workers.
But I know it doesn’t mean that we don’t care. In fact, I would argue in some ways, we are more compassionate, as we only get an hour to learn more about these people, and to learn more about the facility as well. And in turn, the women in the class, and the workers at the facility only get about an hour to learn more about us. Which means the limited time is allowing us to move faster, beyond the bonds of small talk, to really get to what matters.
And I think that is what makes this opportunity so special.
Until next time. 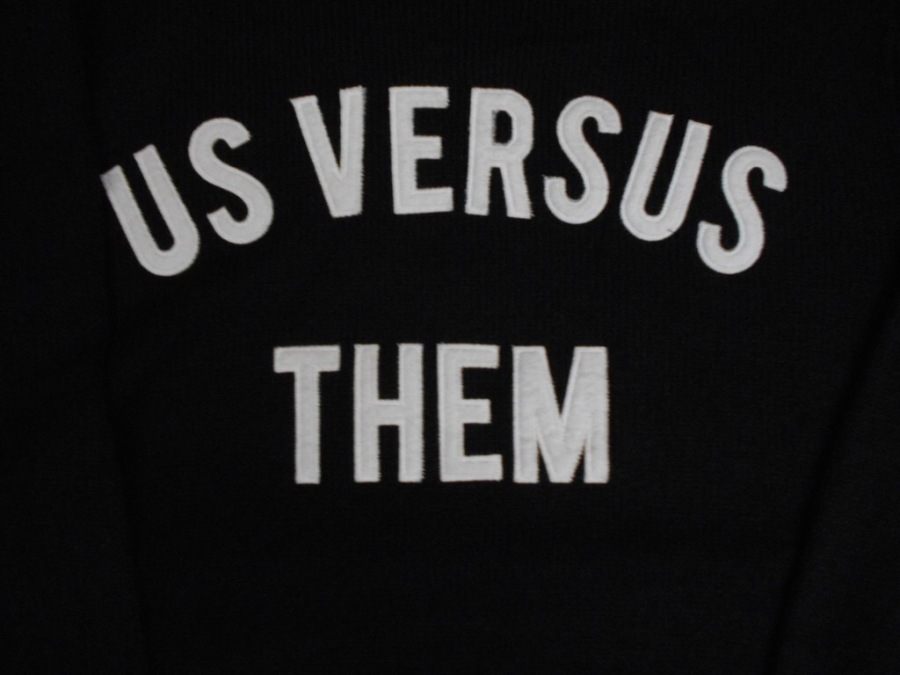 This past week, I started teaching my independent study in the correctional facility.

While I was teaching, there was one major thing that I noticed. The “Us” versus “Them” mentality, particularly in relationship between the inmates and the guards.

For example, in the middle of writing, a guard interrupted the class to check on a specific inmate, which caused some friction between the inmates and the guard. After the encounter, the inmates rallied around the one who was singled out, which served as a unique bonding experience.

They were the “Us” and the guard was “Them”. Which made me realize that outside of the prison hierarchy, we ourselves are constantly dividing outselves into “Us” versus “Them” scenarios.

You and your fellow classmates don’t like your professor? “Us” (the students) versus “Them” (the professor)

Your boss at work is rude and tough? “Us” (the workers) versus “Them” (the boss).

Hierarchies exist outside of the prison system, yet they seem to be one of the most notable examples of authority versus the population.

Might it be due to the extreme environment of working/being in a prison?

Look back on a psychological experiment, known as the Zimbardo experiment or The Stamford Prison Experiment. In the study, the researchers studied the psychological effects of being a prisoner or a prison guard in a mock prison. Despite the fake settings, what was found was that regardless of role, the participants still divided themselves into an “Us” versus “Them”, which created extreme conflict and a severe social hierarchy.

If a staged psychological study can produce these results, it doesn’t seem to fair well for real-world situations. Why is that?

I will keep my eye on this throughout the duration of my independent study, because perhaps there is more to the story.

This past Thursday, I had got my first opportunity to go visit the correctional facility in which I am conducting my independent study. I won’t begin teaching until after I am back from Spring Break, but here are some of the things that I learned and noticed while on a tour of the facility.

The inmates in the correctional facility are allowed to wear their regular clothes, as compared to jumpsuits. I found this particularly interesting, as it makes the facility feel less like a permanent place for the inmates, as their stay time is usually 18 months maximum. It also helps to add a sense of personal expression and identity, whereas in a larger prison, individuality is often taken away.

As this is a correctional facility, not a prison, many of the inmates are there for smaller offenses, usually drug or alcohol related issues or crimes (i.e., DUI, DWI, drug possession, petty larceny) However, for some of the male prisoners, they may also have domestic offenses. If that is the case, they will not be placed with the female inmates in most programs or classes. At the present moment, there are about 200 people (excluding personnel) in the facility, with roughly 45 of them being women. I will be predominately teaching some of the female inmates during my time there.

Many of the prisoners are part of a work track, meaning that they are able to leave the facility in order to attend job interviews or their outside jobs. They will also keep these jobs once they are released from the correctional facility.

There is also a variety of programs and classes that the inmates can attend, from alcohol and drug counseling, to GED preparation. The creative writing class that I am teaching with is also part of the list of programs, in which the inmates can either be placed in, or volunteer to attend.

However, there are still some restrictions. All food and items that are brought in must be checked by the guards for contraband, there are cameras in almost every hall or room (including the bathroom), visitors are required to sign in, and the guards are armed. While the inmates do have more freedoms as compared to the larger prison, the facility is still a secure place, and there are rules that must be followed.

Overall, my first time going in the correctional facility can be best explained by the facility’s program coordinator.

“When they leave here, we want them to be better off than when they first arrived here.”

And with that, I cannot wait to start teaching soon, and I can’t wait to tell you all about my experiences with the writing group, and in the facility in general. Until next time.